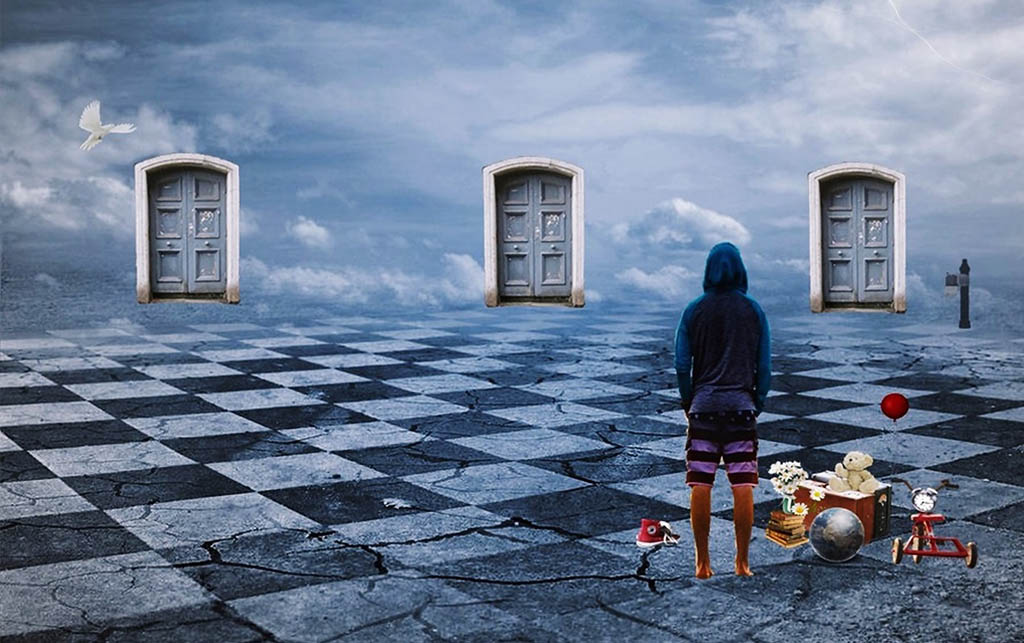 The fear of failure is an important part of the fear of the unknown (Dyer, 1976). Before giving way to examples of fear of the unknown we will explain one of its causes: perfectionism. Fear of failure is very common in perfectionists, who tend to think of very high and sometimes unrealistic goals. At times, this can lead to incapacitating the person, to that objective is left only in a frustrated thought. Perfectionism itself paralyzes them in the fear of not being able to carry out the proposed activity at the desired level. However, the important thing is to start the path and not make it perfect. In the unknown is the discovery.

One of the main causes of immobilizing perfectionism, in addition to genetics, is to have grown up in an environment where achievements were more valued than personal qualities. The failure was seen with great negative consequences that should be avoided, however small. It may be the case of those parents who come to scold their children for having taken a 9 instead of a 10 on a test, without valuing other circumstances or the effort made. In these cases, self-esteem can be affected and may end up becoming an extrinsic self-esteem, that is, subject to the approval of others.

The high expectations generated in the family environment (successful siblings, successful parents, demanding and authoritarian, even constant praise that will cause a low tolerance for failure, etc.) will generate a series of fears in the person that will paralyze him when it comes to Any kind of act, sometimes simple as it may seem and will keep you in your comfort zone, in your comfort zone. Yes, it is one thing to be immobilized and another thing is that the perfectionist thoughts remain inside their heads, which will generate a great frustration, impotence and fear of the irrational failure. There will be a series of cognitive distortions that will make the world look from an unrealistic perspective, such as catastrophism or dichotomous thinking.

24 Examples and solutions to the fear of the unknown.

1. Always eat the same type of food. Why do not you order today to eat in Chinese?

3. Always listen to the same style of music or watch similar movies. If you do not bother to know other forms of art, you can not criticize them, do not be afraid to get out of the conventional.

4. Always live in the same neighborhood or city because the parents chose it in their day. We tend to be afraid of changing our habitat, but I think it is advisable for everyone to do so once to gain autonomy.

5. Always read the same newspaper, with the same opinions. This point can be summarized in a video about the echo camera that I recently uploaded to Facebook.

6. Fear of doing some unknown activity by thinking that you will do it wrong. For example, you could target yoga or sports. Think that most people start like you, without knowing. No one is born learned.

7. Fear of traveling alone. Recommended, strengthens the autonomy. It starts with a small trip, even to a nearby mountain, a beach, etc.

8. Fear of going to the cinema alone. Take advantage of point 3 and go see a movie that does not like any of your friends to the movies, alone. If you watch movies at home alone in the cinema is the same but with a giant screen and better sound, what is the problem ?.

9. Do not ask for advice or help for fear of feeling inferior. Usually we go from strength to strength. Sharing weaknesses will make you stronger because you will learn new skills.

10. Always go and have coffee at the same bar. There are scientific studies that say that going to the same bar is good for health, however, sometimes you go by inertia. Try other bars, if you do not you will not know if they will treat you better or worse.

>> Related article: Having a reference bar is good for health, according to science.

11. Always go the same way to work (or anywhere else). Try to be creative in your travels, you will know new places or maybe a new clothing store and you want to enter, maybe a good time to apply point 2.

12. Conform to a secure job even if you do not like it too much. This is very typical. Given the economic crisis, it is even normal to be afraid of change, because of the instability it may pose, but at least you can introduce yourself to interviews of new jobs and from there decide the change.

13. Always go on vacation to the same place. It is similar to point 4. However, meeting new places is a unique experience. Planning a new travel destination is motivating and exciting, even sometimes more than the trip itself.

14. Avoid people who you rate as deviant from the mean. For example, avoid people of other religions, races, etc. Try to correct these negative biases.

>> Related article: Do you know the difference between stereotypes and prejudices?

15. Fear of asking in supermarkets, coffee shops, etc., unknown for fear of not doing it correctly. For example, there are people who are afraid to ask at the butchery because they do not know how to do it. I assure you the butcher will help you in your choice. However, adult people are often afraid to look silly in such everyday situations.

16. Only do what you know how to do well, to avoid making a fool of yourself. Like always talk about the same subject, always play the same sport, etc. Sure, that’s how youre self-reinforcing. But what is the use of always doing the same thing? Try to start talking about a topic you just started reading or practicing without having too much idea. It is likely that other people do not know what the subject is so you are at the same height. If any of the recipients of the information knows more than you about the subject, acquiring more knowledge, Learning is not bad and you do not have to know everything.

17. Difficulty changing plans. Things do not follow a universal standard pattern. Nothing happens to get out of the planned in some occasions. Try, for example, to perform some unplanned activity, or that is deliberately wrong, such as delivering a job without being well done. You’re not going to be a worse person. In fact, the most normal thing is that you can rectify it later if necessary. Another practical example is to enter a clothing store, try on a lot of clothes and leave without feeling guilty for not having bought anything.

>> Related article: Feeling guilty is not the solution.

18. Do not call. Sometimes we are afraid of a possible conversation, not knowing what it will be, for fear that it will not be what we want. Call that person you want to know something else about. Most likely, your first “Hello”, answer another “Hello.” And if he does not answer, he will.

20. Always stay with the same group of friends, avoid meeting people with other ways of seeing the world. Maybe it’s time to call those friends from childhood to have a coffee or stay with the people on the team or even work, maybe give you other visions. You will have time, if you want, to stay with everyone, in one way or another.

21. Do not dare to engage in a conversation with strangers for fear of what they will say. Sometimes we get stuck in conversations because we think others are smarter or better conversationalists than we are when it does not have to be like that, we just stay in our zone of safety and fear. Try to have a conversation with a stranger, for no apparent reason. It is likely that the other person also wants to talk and talk, but wants to talk do not blame yourself for it because it simply does not want to talk and you do not have to explain yourself.

22. Self-blame for not being successful in everything you do. The greatest advances in history come from errors. Success is not learned, only learned from failure.

23. Perform activities only with the approval of others. You do not have to give explanations to anyone for doing what you want. It is part of your basic assertive rights.

10 questions and answers about bilingualism.

The psychological price: how to fix prices using the brain.