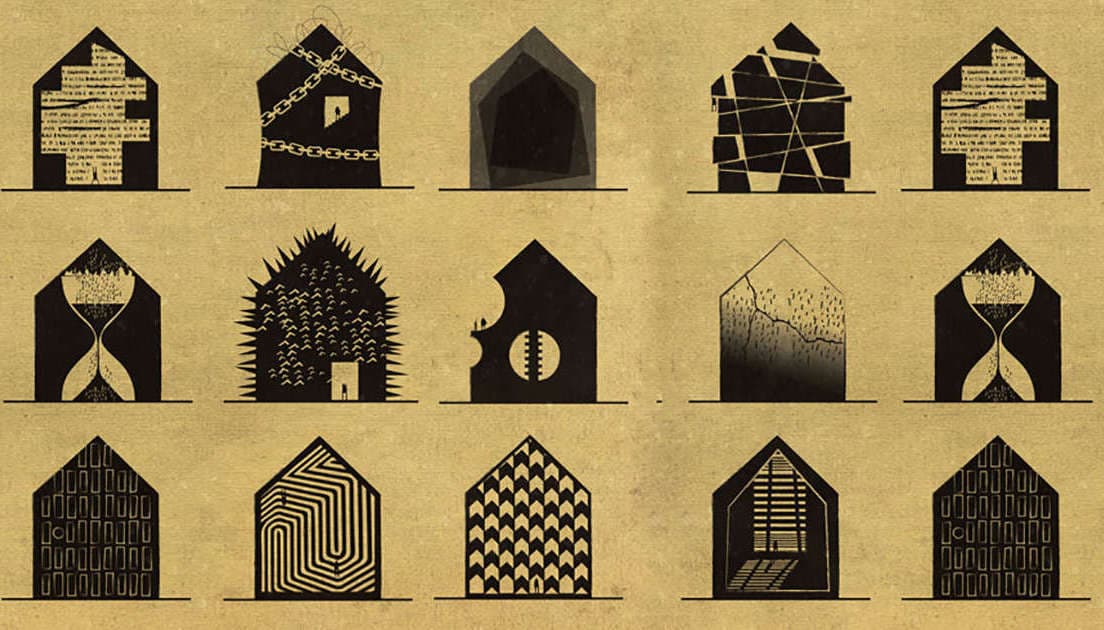 They are varied the artists that from his different perspectives have tried to reflect of graphic form the meaning of the mental disorders, sometimes so difficult to understand if they do not suffer  directly. It does some months spoke of the excellent work of Shawn Coss, that created 31 impactantes illustrations on mental disorders.

In this occasion is the illustrator Federico Babina the one who has transformed 15 mental disorders in architectural figures, in houses that represent the main symptoms of the people that suffer this type of illnesses. The series of illustrations receives the name of Archiatric.

The artist, inspired by the cubism and the surrealism, achieves of simple form transmit the reality of these people in a series of simple houses that go transforming his lines and figures in a representation of the meaning of these psychiatric diagnostics. The people inhabit these houses to the equal that live in his minds the symptoms of his illness.

Definitely it is a big work that helps to understand and sensitise on the mental illness. This is the result accompanied of an explanation of each case: 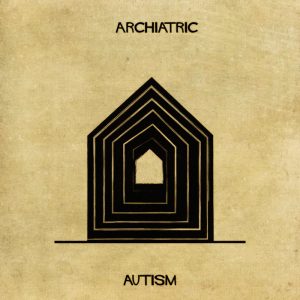 The disorders of the autistic spectrum (TEA) are a series of conditions whose common characteristic is some degree of alteration of the social behaviour, the communication and the language. The people that suffer it have are used to characterised by a repertoire of activities restricted, estereotipadas and repetitive.

The artist re-creates the disorder like a series of lines that shut  in himself same, in his inner house, by the inability to be able to express of correct form with the outside. 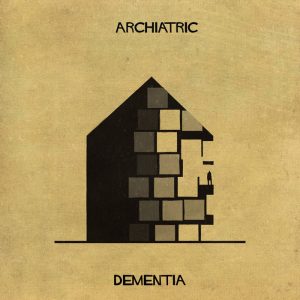 The people affected by the dementia suffer deterioration of the memory, the intellect, the behaviour and the capacity to make daily activities.

Babina Tries to represent it in a house that seems desmoronase paulatinamente in small cubes that finish for disappearing. 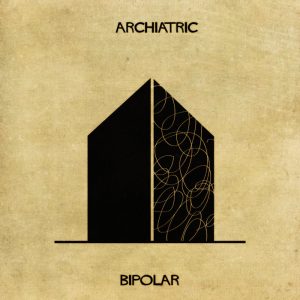 The people with bipolar disorder have marked changes or extremes in the state of spirit. The periods to feel  sad or depressed can alternate with periods to feel  very happy and active or malhumorado and irritable.

In this occasion the house divides  in the two so differentiated realities of these people, on the one hand  the empty of the states depresivos and by the another the periods of big activity. 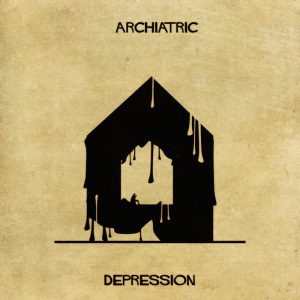 The the depression predominate feelings of sadness, loss, ire or frustration that interfere with the daily life of the person that suffers it.

The house seems to transform in tears that fall on the person that lives in a state of inner sadness. 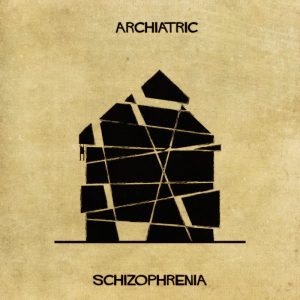 The schizophrenia characterises  by remarkable changes in the behaviour, that can include tendency to the apathy and to the isolation, hallucinations, ideas delirantes and desorganización of the thought among others.

Therefore, the house turns into a composition desorganizada. 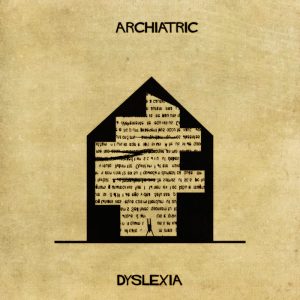 The dyslexia characterises  by a be an alteration of the capacity to read by which arrive  to confuse the order of the words, syllables  or letters.

The house  full of letters with multiple tachones with his inhabitant of the reverse. 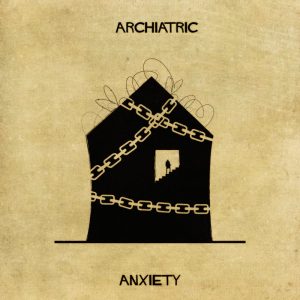 Babina Represents the situation of these people like a house that turns into the own prison of the people, that seem to take refuge in them in front of the fear and excessive worry that prevents them make some activities with normality.

>> Article related: Cuwalk the anxiety is the solution and no the problem. 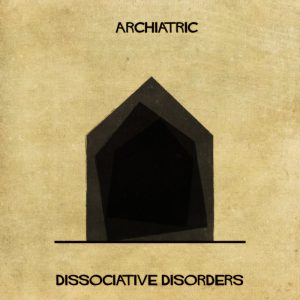 Babina Represents this type of disorders like a house that moves  inside another house, like two different realities that coexist inside a same person. 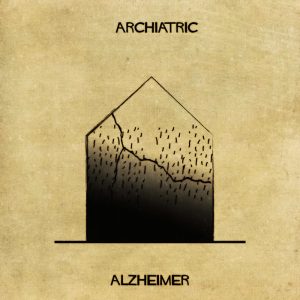 The illness of Alzheimer is a disorder characterised by a chronic and progressive deterioration with effects in the capacity to remember, learn and reason.

The loss by heart and the confusion of these people seems to see represented by this house that cracks  with the step of the time. 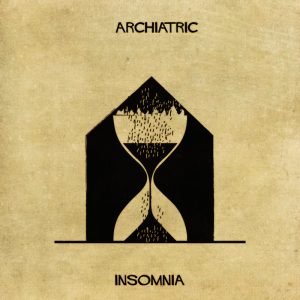 The sleeplessness forms part of the primary disorders of the dream that are those that appear like consequence of some alteration in the mechanisms of the cycle dream-vigilia, in occasions aggravated by psychological factors.

The inability to sleep reflects it the author in his house like clockwork of sand in which the time does not seem to consume of the all while we try to sleep.

>> Article related: 15 guidelines to sleep better: the hygiene of the dream. 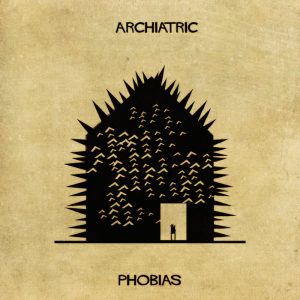 The phobias are irrational fears in front of a situation

The author represents them like a spice of house of the terror in which the person finds  loomed and inmovilizada.

>> Article related: Fear to the unknown or the perfectionism inmovilizante. 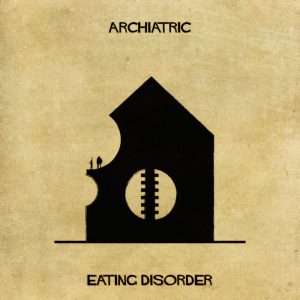 In this occasion to the artist seems to eat his own house to snacks and reflects in the centre the internal problems that suppose this type of disorders, already was anorexia, bulimia, vigorexia, etc. 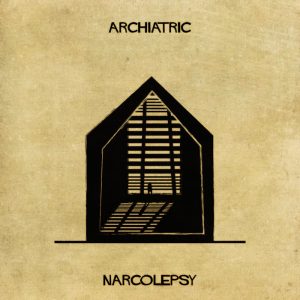 The narcolepsy characterises  by a an excessive dream and incontrolable. The house turns into the persiana of this room in which the person finds  slept. 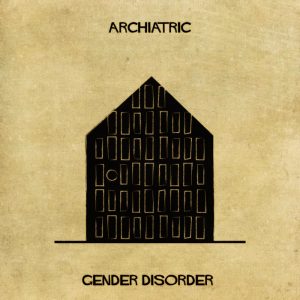 The disorder of identity of gender has disappeared like such in the new DSM-V, the manual of mental disorders by excellence. By his part, the disforia of gender does reference to the unfit psychological derive of the incongruence between the gender assigned from the birth by his sexual appearance and the personal feeling to be man or woman.

The author represents it like a house formed by rectangles in which it exists a piece that does not fit. 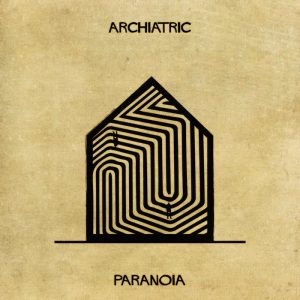 Mental illness that characterises  by the apparition of fixed ideas, obsessive and absurd, based in false or unfounded facts, beside a very conserved personality, without loss of the consciousness neither hallucinations. 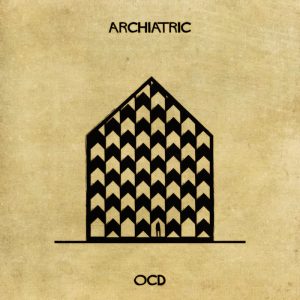 Disorder characterised by the presence of obsessions and compulsiones. The obsessions are thoughts, impulses or recurrent and persistent images that experience  sometime of the disorder like intruders and inappropriate, and cause anxiety or unrest signiﬁcativos.

The house of Babina  full of these recurrent and persistent images in shape of arrows.

>> Article related: The phenomenon of the polar bear and the obsessive thoughts.

Here you can see the original video of the author where can appreciate  of dynamic form like the houses go  transforming in the different disorders.

Improve your self-esteem, source of our personal well-being.

Healthy plate: How to make better food choices for your children