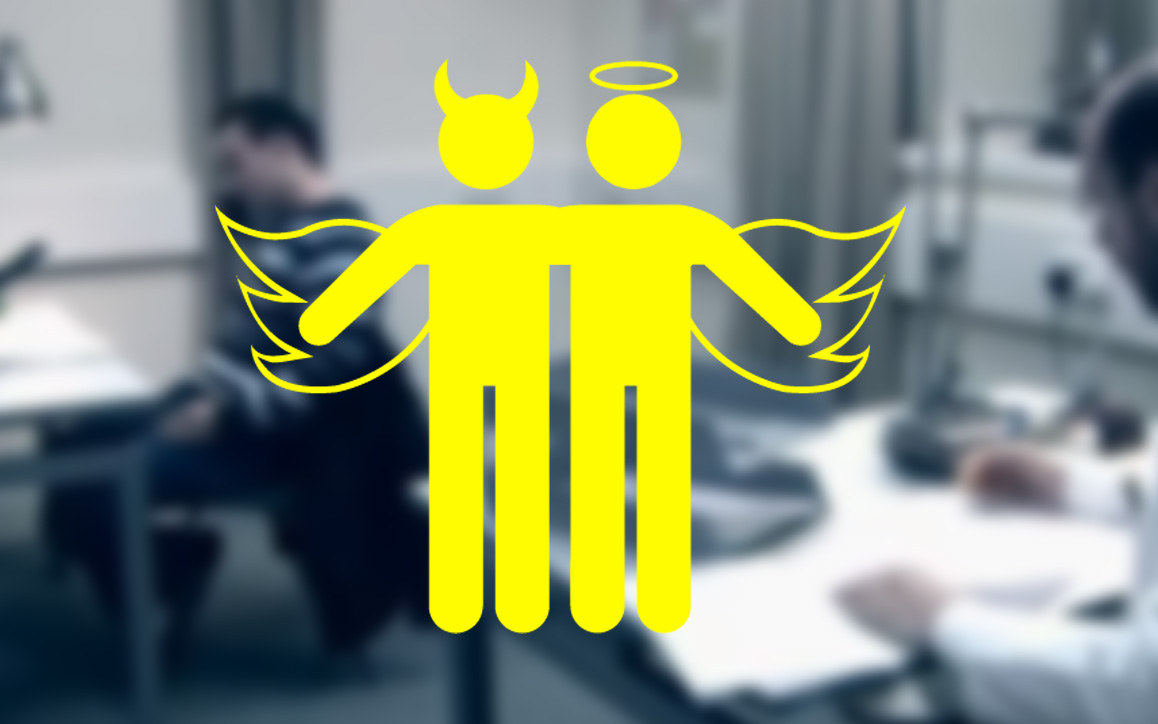 VIDEO ►All good people believe us. We all thought that we would not do harm to anyone, but are you sure that we are all little angels ?. American psychologist Stanley Milgram (1933.-1984) was not sure about it and made a controversial experiment to understand human behavior in orders wielding superior. The year was 1961 and the great genocides committed by Nazi Germany were still in the air. Are the perpetrators of the shooting or those responsible for activating the gas chambers were evil people or just following orders? How far human evil comes?

To try to give a psychological explanation devised the already known as:

volunteers were recruited for a hypothetical study of memory and learning, which would be financially compensated all participants and hid them actually going to share in social psychology research on obedience to authority.

To make the hypothetical experiment “memory and learning” is required to three simultaneous persons:

To “circumvent” the student and teacher posts was taking a role, an actor gets his accomplice paper indicating that he has played the role of student with what the volunteer is left with no choice but to perform the role of master.

It spread to people in two different rooms but they could see, just listen. One of them was the “student” and the other teacher and experimenter. In the presence of the master, the “student” is tied to a kind of electric chair reduced mobility and connected to electrodes with a “cream to prevent burns” and indicates that the discharges can be very painful but does not cause damage irreversible. Each trip to the teacher’s questions would lead to a progressive download.

To verify that the downloads work and print pain shock 45 volts both “student” and the teacher is violated. In this way the teacher knew firsthand what each supposed electric shock.

Subsequently, the “student” in one of the rooms already prepared and the teacher experimenter passed to another module is allowed. This is where the teacher receives a number of words you have to teach the “student” by order of the experimenter. For this, the teacher will read a list of words to memorize and then remember correctly after a series of options that are offered. You should press a button 1 to 4 to indicate the correct word. If the answer is incorrect, the “student” would receive an electric shock to start with and go ascending 15 volts to 450 volts accumulates progressively as failures.

The teacher really think that infringe downloads on the “student” when in fact it is a simulation and as a good actor will represent the effects of successive discharges, complaining increasingly excessive pain: shouting, banging on the wall to asking completion experiment and dying (270 volts) and even stops responding to questions (300 volts).

The authority of the experimenter got the majority of teachers will reach 75 volts despite their nervousness. Upon reaching the 135 volts some of them refused to continue the experiment but many continued to ensuring that not responsible for what could happen to the “student” would be made.

When teachers asked him not carry it to the experimenter told them that they should continue with 4 consecutive mandatory sentences for each time I asked:

Only if the fourth sentence after the teacher did not want to continue the experiment would stop. Otherwise it would continue to 450 volts.

the same process for the 40 volunteers began.

Milgram found that the average maximum discharge would be about 130 volts and the maximum voltage applied just as sadistic minds but … he was right?

65% of volunteers applied the maximum voltage, although many in a state of extreme discomfort.
No participant stood up to the level of 300 volts.
And what would you do?

Theory of reification: a person sees herself as an instrument that makes the wishes of someone else and therefore does not consider himself responsible for his actions (military executing orders).

Theory of conformism: a subject who does not have the ability or knowledge to make decisions transferred decision-making to the group (the teacher understood that the experimenter knew their stuff and shifted its responsibility).

In this video you can see a newer version of the Milgram study but with virtually the same results. Disturbing!

Icons made by Freepik from www.flaticon.com is licensed by CC BY 3.0

Psychology and theater, a two-way relationship