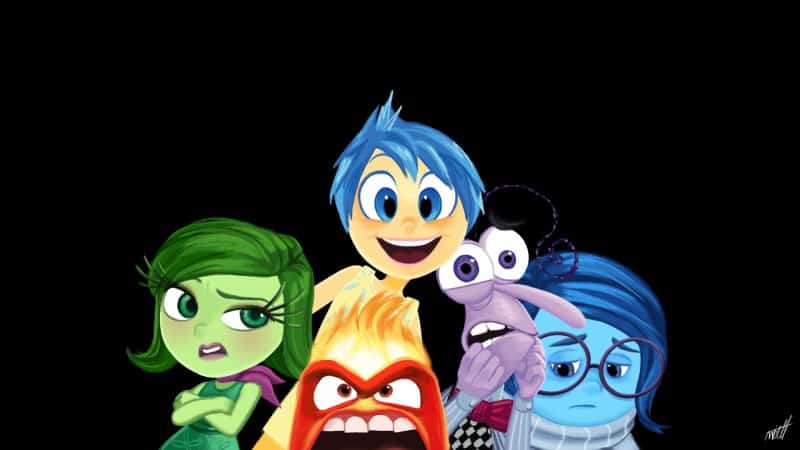 I not want to think and I went to the movies. Only me. I wanted to see Inside Out (the reverse), animated film Disney-Pixar with very good looking and criticism. Deals with the topic of emotions that I like so I went there. I arrived just prior to the start of the movie film. I sat on the chair back and the lights went out. That’s when it started prior to the film, which certainly leaves much to be desired, short and reminded me that in theaters here, unfortunately, still bending the films and would force me to have it come back to see the original version. The movie starts. Silence. I follow closely.

Very good. I loved it. Bravo once again by Pixar.

Let the analysis from the psychological point of view. I will not be the first to circulate and probably hundreds of thousands of views. I’ll give you mine, I want to write about it, simply.

The delicate eye with spoilers!

I’ll start with a brief definition of what is emotion for psychology. Let’s say that emotion is the concept which uses psychology to describe and explain the effects of a multidimensional process, mainly in charge of:

Where is the thrill of surprise?

One of the things that struck me is that they do not introduce one of the primary emotions (discrete) and generated in the first years of life: surprise. I do not know why not include it because they have certainly had a major psychological counseling. There is still no consensus on which are the primary and secondary emotions, as this could also include love, shame or guilt but in the case of surprise is a basic primal emotion. Explain why it is important to include it.

The thrill of surprise might be reflected in the faces of other emotions to view events through the eyes of Riley.

The film’s protagonist Riley has 11 years, but we see all its evolution from birth. This is when the primary emotions that play a role of human adaptation (Darwin already said), in addition to its social and motivational function to get expand our range of emotions to other post-secondary form. These adaptive functions are:

Joy >> Membership. If you look, it’s what gets people to us their love. Why babies do grace, so pampered. It is well reflected in the film when the first little girl smiles to parents drooling. Promotes prosocial behavior.

Fear >> Protection. It is clear that if naciésemos with some fear what awaits us outside the womb would last rather little in the world. Safety is paramount to stay alive. It is the one that triggers that no primary anxiety, excitement too basic.

Anger >> Self Defense. Yes, when people think that a baby cries most of the time it is what is protesting … or do you see the lagrimillas fall? It is the means to an end do not possess. Eye !, not confudirla with hostile or aggressive. Is not the same.

Sadness >> Reintegration. And in life it does not come all done and you have to overcome situations that affect welfare. To find reintegrarte you have to know where not want to be and favors to give us the emotional and social shelter is needed to deal with situations. It makes us rethink, protects us. It is the emotion that best reflected in the film, from my point of view should be the protagonist. And it is.

Disgust>> Rejection. It is related to sadness rather than with other emotions although the film does not seem so. It is known as distress.

Surprise >> Interest. It is the most motivational and fundamental to explore the world around us part. I like to think that the film does reflect it, but in the face of other players emotions before the events seen through the eyes of Riley. All they put face of surprise when something happens, but the surprise does not interact well with other emotions. It is independent within dela multidimensionality of further processing of an emotional event. I think I should have a better performance in the movie.

A curious fact of the film is that the colors of emotions are scholars who have used over the years other.

In the film make good reference to emotional process, evaluation reflected in the discussions between emotions about which should act at all times and subsequent learning process transformed into balls that carry memory. Although, as the story seems that memories are stable and fixed over time when in fact they are flexible.

In short, the film seems to me a great educational interest and that good management of emotions avoid many greater evils, it is essential to educate in emotional intelligence (Goleman, 1995) because unlike other types of intelligence it itself is malleable and more the early years of development.

From my point of view the focus of the film part of a current psychological acceptance and commitment, as recognizing our sorrows help us face our challenges in achieving emotional balance.

The film gives to many articles on emotional intelligence or emotions and I’m glad that have focused on smaller, than any of them be sensitized to better understand what goes on inside before your know better how to control it.

In the film talk about many more interesting things and not just the emotional plane, and the subconscious (Freud sells a lot and had to put it in a commercial film), like dreams work, the long-term memory and a long list that will for giving keys entertain and investigate a little more about it.

Ah! and out dinosaurs at a time of the film. Everything is better with dinosaurs.

Music in line with the content: What’s in your head (Disclosure)

Holiday Travel: How to Reduce Travel Stress and Anxiety